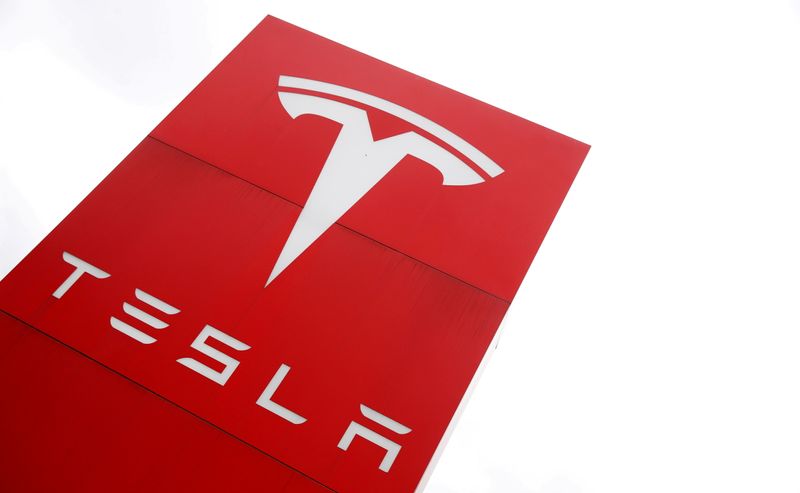 © Reuters. FILE PHOTO: The logo of car manufacturer Tesla is seen at a dealership in London, Britain, May 14, 2021. REUTERS/Matthew Childs/File Photo

BENGALURU (Reuters) – Shares of Indian auto parts suppliers rose as much as 14% on Monday following a report electric-vehicle maker Tesla (NASDAQ:) Inc was in talks with at least three companies to source critical parts for its planned entry into the country.

Tesla, which is looking to set up a factory in India if it is successful with imported vehicles, is holding early talks with some companies for the supply of components such as instrument panels, windshields, differential gears, brakes and power seats, the Economic Times reported https://economictimes.indiatimes.com/industry/renewables/tesla-in-talks-with-3-local-companies-for-parts-supply/articleshow/85728000.cms?from=mdr on Sunday.

Bharat Forge Ltd, Sona BLW Precision Forgings Ltd and Sandhar Technologies Ltd are understood to be among the Indian companies already supplying components to Tesla, according to the report. Shares of the three Indian firms rose as much as 6.2% to 13.7% on Monday.

Tesla, Bharat Forge, Sona BLW and Sandhar did not immediately respond to Reuters requests for comment.

India’s auto component makers want Tesla’s potential entry to benefit the country’s suppliers, and one way to achieve that is for the company to manufacture locally, the head of an industry body said https://www.reuters.com/world/india/indian-auto-part-makers-want-teslas-entry-benefit-local-companies-2021-08-03 earlier in August.

The country is the world’s fifth-largest car market with annual sales of 3 million vehicles, according to industry estimates, with electric vehicles (EVs) making up a fraction of the total.

However, EV sales have been gradually rising in the country as states improve charging infrastructure.

Elon Musk, the CEO of Tesla, the world’s most valuable automaker by market capitalisation, has tweeted several times about the company’s impending foray into India.

Tesla registered a local company in January and by April started scouting for locations https://www.reuters.com/article/india-tesla-idUSKBN2BV0Q3 to open showrooms in New Delhi, Mumbai and Bengaluru.